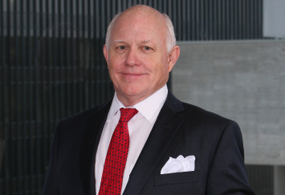 George Morris has been associated with the energy industry and financial services business for over 30 years as an investment banker and Board Member of several public energy companies. In January 2020, he merged Morris Energy Advisors, LLC into Parkman Whaling

During most of his year career on Wall Street, he has specialized in the Midstream and Downstream sectors of the energy industry extending into specialty chemicals and products. He also developed significant sector experience in the oilfield and downstream services & equipment sectors. This specialization has given him an in-depth understanding of the unique economic and competitive dynamics of these elements of the energy value chain.

Before joining Parkman Whaling, George founded Morris Energy Advisors, LLC. Prior to Morris Energy Advisors LLC, he was a senior banker in Merrill Lynch & Co.’s Global Energy & Power Group having rejoined the firm with its acquisition of Petrie Parkman & Co. Prior to joining Petrie Parkman, Mr. Morris was a partner at Simmons & Company International. Mr. Morris began his career at The First Boston Corporation in 1982 as a generalist in the firm’s Corporate Finance Department and later a specialist in its highly recognized Merger Group. During his eleven years at First Boston, he helped build the premier Energy Group of its time on Wall Street.

Mr. Morris has also previously served on the Boards of several publicly traded companies and partnerships, typically as a Financial Expert under SEC and NYSE Rules, including Arch Coal Inc., Energy XXI Gulf Coast, Inc., and Calumet Specialty Products Partners, LP. He is also a member of the National Association of Corporate Directors (NACD). Mr. Morris graduated from the University of Texas where he received a BBA in 1977 and a MBA in 1979. He also earned a Doctorate in Jurisprudence from Southern Methodist University in 1982 and is a member or past member of the State Bar of Texas, the National Petrochemical & Refiners Association and the Gas Processors Association